The idea of a probability density function

We capture the notion of being close to a number with a probability density function which is often denoted by $\rho(x)$. If the probability density around a point $x$ is large, that means the random variable $X$ is likely to be close to $x$. If, on the other hand, $\rho(x)=0$ in some interval, then $X$ won't be in that interval.

To translate the probability density $\rho(x)$ into a probability, imagine that $I_x$ is some small interval around the point $x$. Then, assuming $\rho$ is continuous, the probability that $X$ is in that interval will depend both on the density $\rho(x)$ and the length of the interval: \begin{gather} \Pr(X \in I_x) \approx \rho(x) \times \text{Length of $I_x$}. \label{eq:densityapprox} \end{gather} We don't have a true equality here, because the density $\rho$ may vary over the interval $I_x$. But, the approximation becomes better and better as the interval $I_x$ shrinks around the point $x$, as $\rho$ will be come closer and closer to a constant inside that small interval. The probability $\Pr(X \in I_x)$ approaches zero as $I_x$ shrinks down to the point $x$ (consistent with our above result for single numbers), but the information about $X$ is contained in the rate that this probability goes to zero as $I_x$ shrinks.

For a function $\rho(x)$ to be a probability density function, it must satisfy two conditions. It must be non-negative, so the that integral \eqref{eq:density} is always non-negative, and it must integrate to one, so that the probability of $X$ being something is one: \begin{gather*} \rho(x) \ge 0 \quad \text{for all $x$}\\ \int \rho(x) dx = 1, \end{gather*} where the integral is implicitly taken over the whole real line.

Equation \eqref{eq:density} is the right way to define a probability density function. However, if we aren't worrying about being too precise or about discontinuities in $\rho$, we may sometimes state that \begin{gather*} \Pr(X \in (x,x+dx)) = \rho(x)dx. \end{gather*} Here, we are thinking of $dx$ as being an infinitesimally small number so that $(x,x+dx)$ is an infinitesimally small interval $I_x$ around $x$, in which case the approximation \eqref{eq:densityapprox} becomes exact, at least if $\rho$ is continuous. 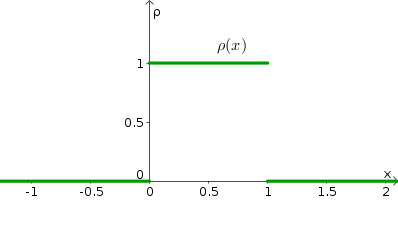 The function $\rho(x)$ is a valid probability density function since it is non-negative and integrates to one.

In this definition of $\rho(x)$ it doesn't matter that we defined $\rho(1)=0$. The density at a single point doesn't matter. We would get the same random variable if we used the density \begin{gather*} \rho(x) = \begin{cases} x & \text{if $0 \lt x \le 1$}\\ 2-x & \text{if $1 \lt x \lt 2$}\\ 0 & \text{otherwise} \end{cases} \end{gather*} so that $\rho(1)=1$. This second definition is a little nicer because $\rho$ is continuous. However, the value of an integral doesn't depend on the value of its integrand at just one point, so given the definition of equation \eqref{eq:density}, the probability of the random variable $X$ being in any set is unchanged if we change $\rho$ at just one point (or at any finite number of points).

It turns out that Gaussian random variables show up naturally in many contexts in probability and statistics.