The definition of differentiability in higher dimensions

For a scalar valued function of two variables, $f: \R^2 \to \R$ (confused?), this condition meant the existence of a tangent plane, such as the one shown in this applet, which is the example used in the introductory page. 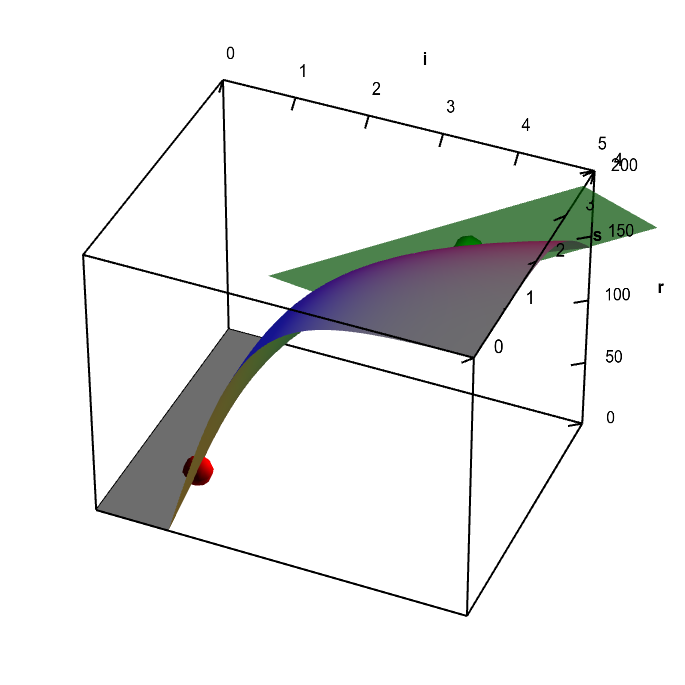 Although we have geometric intuition that helps us understand a tangent plane, this intuition doesn't help us understand the general case of a linear approximation of a function $\vc{f}: \R^n \to \R^m$. Even for the two-dimensional case where differentiability is based on existence of a tangent plane, we should still be precise about what me mean by the existence of this linear approximation. Otherwise, we could never be certain if a given plane was really tangent to the graph.

The problem with this definition becomes immediately clear if you try to apply it to the one variable linear approximation, i.e., the tangent line of a curve. As shown in the following figure, many lines satisfy the above condition, as it only specifies that the line passes through the point $(a,f(a))$. Since the lines and the function are continuous, their distance clearly goes to zero as $x$ approaches $a$. How can we pick out the tangent line (shown in blue) to the graph of $f(x)$ (shown in green) from among all these candidate lines? 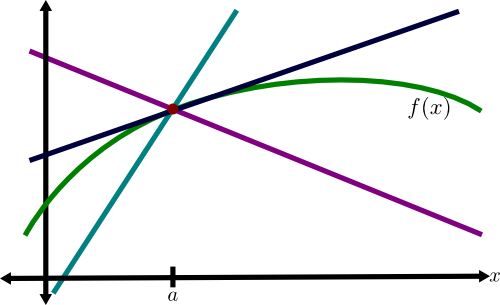 What does that limit really mean?

It was a lot of work to derive a sensible expression for the definition of differentiability. You deserve to rest after getting through this. But don't rest for long because there are some more important subtleties lurking in that limit definition. It turns out that a limit in two or more dimensions is a bit more complicated than a limit in one dimension. One has to worry about the many different ways in which you can approach the point $\vc{a}$. In one dimension, you can only approach from either above or below, but more dimensions gives you a lot more room to move around.

For a function to be differentiable, we need the limit defining the differentiability condition to be satisfied, no matter how you approach the limit $\vc{x} \to \vc{a}$. This requirement can lead to some surprises, so you have to be careful. For example, don't make the mistake of assuming that the existence of partial derivatives is enough to ensure differentiability. You've been warned! Maybe it'd be best to check out the subtleties of differentiability in higher dimension so you'll be prepared for any function you might meet.