Who knows, maybe this function would look something like the below graph. 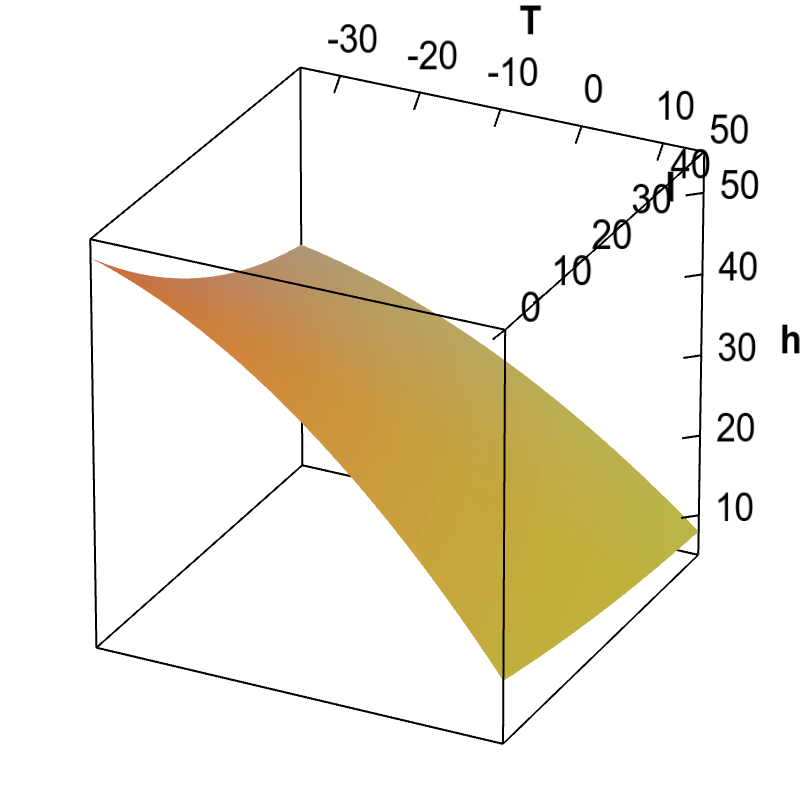 Suppose you aren't changing the amount of insulation in your house, so that we view $I$ as a fixed number. Then, if we look at how the heating bill changes as temperature changes, we're back to our first case above. The only difference is that we now view $h$ as a function of both $T$ and $I$, and we are explicitly leaving one of the variables ($I$) constant. In this case, we call the change in $h$ the partial derivative of $h$ with respect to $T$, a term that reflects the fact some variables remain constant. We also change our notation by writing the $d$ as a $\partial$, so that \begin{align*} \pdiff{h}{T}(a,b) = \frac{\text{change in $h$}}{\text{change in $T$}} (\text{at $T=a$ while holding $I$ constant at $b$}). \end{align*} If $T$ is given in degrees Celsius, then $\displaystyle \pdiff{h}{T}(a,b)$ is change in heating cost per degree Celsius of temperature increase when the outside temperature is $a$ and the amount of insulation is $b$.

Now, imagine you are considering the possibility of lowering your heating bill by installing additional insulation. To help you decide if it will be worth your money, you may want to know how much adding insulation will decrease the heating bill, assuming the temperature remains constant. In other words, you want to know the partial derivative of $h$ with respect to $I$: \begin{align*} \pdiff{h}{I}(a,b) = \frac{\text{change in $h$}}{\text{change in $I$}} (\text{at $I=b$ while holding $T$ constant at $a$}). \end{align*} If $I$ is given in centimeters of insulation, then $\displaystyle \pdiff{h}{I}(a,b)$ is change in heating cost per added centimeter of insulation when the outside temperature is $a$ and the amount of insulation is $b$.

In the graph of $h(T,I)$, the partial derivatives can be viewed as the slopes of the graphs in the $T$ direction and in the $I$ direction, as illustrated in the below applet. 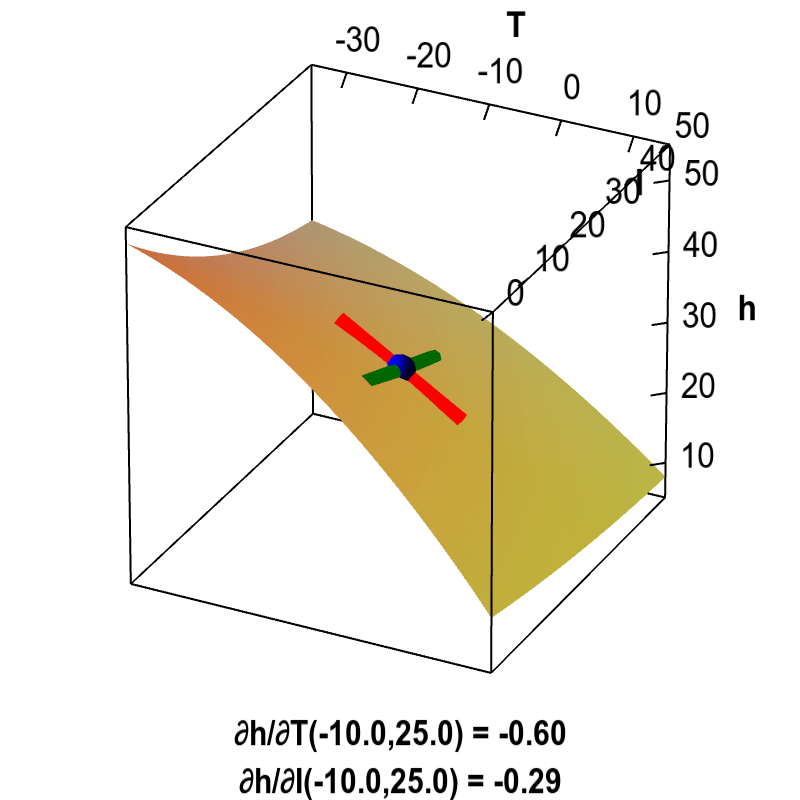 As mentioned above, a heating bill depends on many more factors than temperature and insulation. We could define a function $h$ of many variables to give a more accurate estimate of heating costs. However, the math is the same no matter how many variables $h$ depends on, as long as it depends on two or more. So, if you want to include the effect of the size $S$ of a house, you can define $h(T,I,S)$ to be the heating bill as a function of temperature, insulation, and size. Then $\displaystyle \pdiff{h}{S}(T,I,S)$ would tell you how much the heating costs change as you change the size, leaving temperature and insulation constant. (We can still make sense of these partial derivatives even if we cannot plot a graph of $h(T,I,S)$.) The value of $\displaystyle \pdiff{h}{S}$ would presumably be useful only if you are planning to move since you probably don't plan to cut a room off your house to save heating costs (though you could just not heat a room and effectively reduce the size).

You can study some examples of calculating partial derivatives.