The configuration model1,2 allows one to generate a network model that has exactly a prescribed degree distribution. It allows one to generate networks with the same degree distribution as a given network. One can simply cut all the edges in the network, so every node still retains its degree by the number of half-edges or stubs emanating from it. The result will be an even number of half-edges. To create new networks with the same degree, one simply needs to randomly pair all the half-edges, creating the new edges in the network. 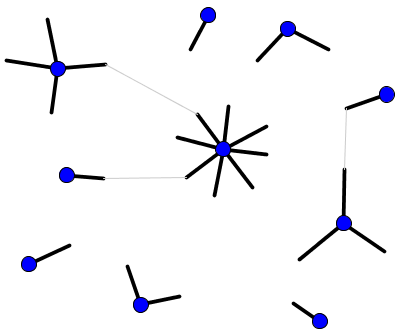 An alternative model by Chung and Lu

One can extend the ER random network model to different degree distribution if one relaxes the requirement that all samples exactly reproduce the desired degree distribution. Instead, of assigning degrees to each node, one can one can simply assign each node's expected degree. Chung and Lu4,5 developed an algorithm to generate networks with these expected degrees. If one sets the expected degree of each node to be the same, one obtains the ER random network model from Chung and Lu's algorithm.

We described both above algorithms in terms of undirected graphs, but they can be simply extended to directed graphs. In this case, specifying the model is a little more complicated as one needs to specify the full two-dimensional degree distribution in terms of in- and out-degree.