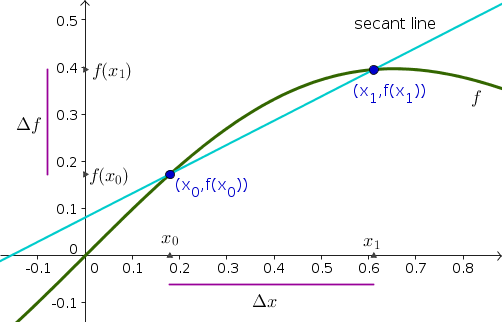 The slope of a secant line. The line (in red) passing through two points (large blue and smaller cyan) on the graph of the function $f$ (in green) is a secant line. The large blue point is at the location $(x_0,f(x_0))$, which you can change by dragging the point or typing in a value for $x_0$. The smaller cyan point is at the location $(x_0+\Delta x,f(x_0+\Delta x))$, which you can change by dragging the point. You can also change $\Delta x$ by typing in a value or changing the length of the purple $\Delta x$ line segment (drag small cyan point). You cannot change $\Delta y$ directly, as it is calculated as $\Delta y = f(x_0+\Delta x)-f(x_0)$. The slope of the secant line is $\frac{\Delta y}{\Delta x}$. As you let $\Delta x$ approach zero, the two points become closer together, and the secant line becomes closer to the tangent line of the graph of $f$. However, if you set $\Delta x=0$, then the secant line is not defined, and the slope $\frac{\Delta y}{\Delta x}=\frac{0}{0}$ is also not defined. However, if $\Delta x$ is very small, but not zero, the secant line becomes very close to the tangent line, which can be thought of as the limit of the secant line as $\Delta x$ approaches zero. If you click the “show limit for $\Delta x=0$” check box, then when you enter $\Delta x=0$, the applet instead shows the limiting tangent line. The slope of the tangent line, denoted by $\frac{dy}{dx}$ is the limit $\lim_{\Delta x \to 0}\frac{\Delta y}{\Delta x}$ and is also displayed. You can use the buttons at the top to zoom in and out as well as pan the view.

To keep the slope and the secant line defined, we need to keep $\Delta x$ from being exactly zero. On the other hand, we want to make $\Delta x$ very small, so that we can match the behavior of $f$ right near the point $x_0$. The solution to this problem is to use a limit, one of the fundamental notions underlying calculus.

Right now, we won't make the notion of a limit precise, but just give the general idea. The idea is that, although we can't make $\Delta x$ exactly equal to zero, we can make it smaller and smaller. As we make $\Delta x$ very close to zero, the secant line matches the graph of the function around the point $x_0$ very well.

The derivative of $f$ depends on the point $x_0$ where it is evaluated. A nonlinear function will have a different slope at different points. To explore the derivative and tangent line of $f$ in the above applet, check the “show limit for $\Delta x=0$” checkbox. Then, move the point around to see how the tangent line and its slope vary as you change $x_0$.