The process of finding a potential function of a conservative vector field is a multi-step procedure that involves both integration and differentiation, while paying close attention to the variables you are integrating or differentiating with respect to. For this reason, given a vector field $\dlvf$, we recommend that you first determine that that $\dlvf$ is indeed conservative before beginning this procedure. That way you know a potential function exists so the procedure should work out in the end.

In this page, we focus on finding a potential function of a two-dimensional conservative vector field. We address three-dimensional fields in another page.

With this in hand, calculating the integral \begin{align*} \dlint \end{align*} is simple, no matter what path $\dlc$ is. We can apply the gradient theorem to conclude that the integral is simply $f(\vc{q})-f(\vc{p})$, where $\vc{p}$ is the beginning point and $\vc{q}$ is the ending point of $\dlc$. (For this reason, if $\dlc$ is a closed curve, the integral is zero.)

We might like to give a problem such as find \begin{align*} \dlint \end{align*} where $\dlc$ is the curve given by the following graph. 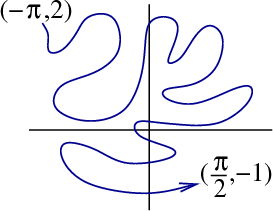