One condition for path independence is the following. For a simply connected domain, a continuously differentiable vector field $\dlvf$ is path-independent if and only if its curl is zero.

Let's try another test, this time a test for path-dependence. If we can find a closed curve along which the integral of $\dlvf$ is nonzero, then we can conclude that $\dlvf$ is path-dependent. If the curve does not go around the origin, then we can use Green's theorem to show the integral of $\dlvf$ zero, \begin{align*} \lint{\adlc}{\dlvf}= \int_\dlr \left(\pdiff{\dlvfc_2}{x}-\pdiff{\dlvfc_1}{y}\right) dA = \int_\dlr 0 dA = 0, \end{align*} as the vector field is defined everywhere in the region $\dlr$ inside the closed curve $\adlc$.

We must try a closed curve where Green's theorem does not apply, i.e., one that goes around the point at the origin where $\dlvf$ is not defined. We'll use the unit circle.

The hole in the domain at the origin did end up causing trouble. We found a curve $\dlc$ where the circulation around $\dlc$ is not zero. The vector field $\dlvf$ is path-dependent. 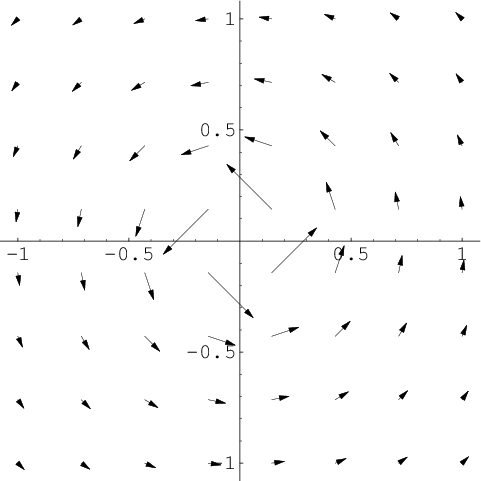 Further insight into $\dlvf$ can be obtained from the fact that $\dlvf$ has a potential function if, for example, you restrict yourself to the right half-plane with $x>0$. In this case, you can write $\dlvf(x,y) = \nabla f(x,y)$, where $f(x,y) = \arctan(y/x)$. Of course, this potential function cannot be extended to the whole plane, or we'd run into a contradiction with the fact that $\dlint \ne 0$ when $\dlc$ is the unit circle. Besides not being defined along the line $x=0$, it is also discontinuous across that line. But, the existence of this potential function explains why the curl should be zero away from the line $x=0$. (The whole line $x=0$ isn't special for $\dlvf$, as the origin is the only point that causes problems. You could, for example, use $f(x,y) = -\arctan(x/y)$ for a potential function away from the line $y=0$.)