When creating models of bacteria growth and penicillin clearance, we based our models on an understanding of the process leading to the observed data. In these cases, we engaged in mathematical modeling of the underlying biology.

Leaf smoothness as function of temperature

Jack A. Wolfe1 observed that leaves of trees growing in cold climates tend to be incised (have ragged edges) and leaves of trees growing in warm climates tend to have smooth edges (lacking lobes or teeth). He measured the percentages of species that have smooth margins among all species of the flora in many locations in eastern Asia. His data, as read from a graph in U. S. Geological Survey Professional Paper 1106, is presented in below. 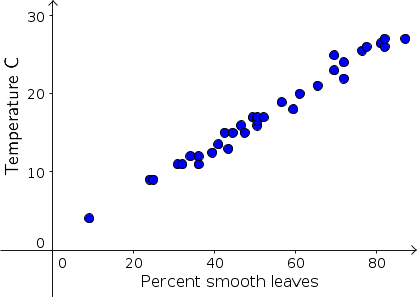 Average temperature °C versus percentage of tree species with smooth edge leaves in 33 forests in eastern Asia. The equation of the line is $y= -0.89 + 0.313 x$.

The line, $$\mbox{temp} =0.89 + 0.313 \times \mbox{% smooth}$$ is shown above and is close to the data. The line was used by Wolfe to estimate temperatures over the last 65 million years based on observed fossil leaf composition. The prospects of writing a mathematical model describing the relationship of smooth edge leaves to temperature are slim, however.

On several nights during August and September in Ames, Iowa, some students listened to crickets chirping. They counted the number of chirps in a minute (chirp rate, $R$) and also recorded the air (ambient) temperature ($T$) in °F for the night. The data were collected between 9:30 and 10:00 pm each night, and are shown in the following table and graph. 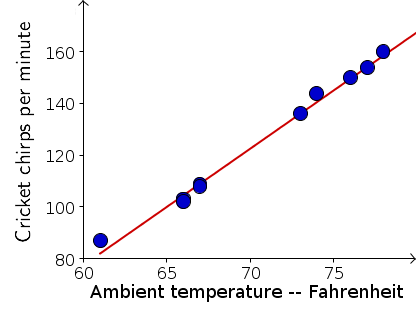 Both of these examples are examples of data modeling. We fit a line to the data, but there is no underlying explanation of what mechanism is causing the relation.