The idea of a dynamical system

What is a dynamical system?

The first step in creating a dynamical system is to pin down what is the special “something” that we want to evolve with time. To do this, we need to come up with a set of variables that give a complete description of the system at any particular time.

By “complete description,” we don't necessarily mean that the variables will completely describe a real life system we may be trying to model. But, the variables must completely describe the state of the mathematical system. In a dynamical system, if we know the values of these variables at a particular time, we know everything about the state of the system at that time. To model some real life system, the modeler must clearly make a choice of what variables will form the complete description for the mathematical model.

In a continuous dynamical system, on the other hand, the state of the system evolves through continuous time. One can think of the state of the system as flowing smoothly through state space. As time evolves, the state $x(t)$ at time $t$ can be thought of as a point that moves through the state space. The evolution rule will specify how this point $x(t)$ moves by giving its velocity, such as through a function $v(t)=F(x(t))$, where $v(t)$ is the velocity of the point at time $t$. In this case, starting with an initial state $x(0)$ at time $t=0$, the trajectory of all future times $x(t)$ will be a curve through state space.

The bacteria population grows because each baterium grows and the divides into two bacteria. For this example, we will assume that all the bacteria divide at the same time. Then, we can define one time step as the time for all the bacteria to divide into two. For this model, we ignore how much real time elapses between each division cycle, but define our time so that one unit of time is the time between divisions. In this way, we form a discrete dynamical system, and simply need a rule to determine the population size $b_t$ at the times $t=1,2,3, \ldots$ given the initial population size $b_0$ at time $t=0$.

The rule $b_{n+1}=2b_n$, coupled with the initial population size $b_0$ at time $t=0$, completely determines the population size at all future times $t$. Our dynamical system is well defined.

The bacteria doubling dynamical system is illustrated by the following applet, which shows a number of ways to represent the solution trajectory $b_1, b_2, b_3, \ldots.$ In this example, the dependence of the solution on the initial state $b_0$ is quite simple. The trajectory is just scaled by $b_0$.

In the above description of this example, we defined the state space to be the non-negative integers. The mathematical system will work the same way if we allow the population size to be any real number. Of course, it might be hard to interpret the meaning of fractional bacteria. But, as you learn how to analyze discrete dynamical systems, you will see how expanding the state space to include all real numbers will facilitate the mathematical analysis.

A second example dynamical system is a model of an undamped pendulum, that is, a pendulum that oscillates without any friction so that it will continue oscillating forever. Imagine that the pendulum consists of a rigid rod with a ball fastened at its end and that the pendulum is free to rotate around the pivot point. 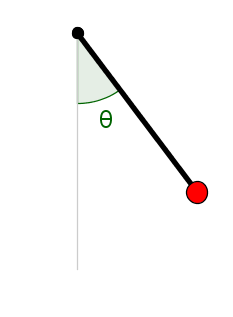 The angle $\theta$ completely specifies the position of the pendulum. So, our first thought might be that $\theta$ should completely determine the state of the dynamical system. However, we cannot use $\theta$ as the only state variable. If the above picture of the pendulum were a snapshot of a pendulum, we don't have enough information to know where the pendulum will move next.

In order to determine the future behavior of the pendulum, we need to know not only its position at the time of the snapshot, but also its velocity. Hence, the state space must include both those variables. It turns out that for this idealized pendulum, the angle $\theta$ and the angular velocity $\omega$ completely determine the state of the system. Both $\theta$ and $\omega$ will evolve over time, and their value at one time determines all their future values. The dynamical system is two-dimensional, and since $\theta$ and $\omega$ evolve continuously, it is a continuous dynamical system.

In the above bacteria dynamical system, we plotted the one-dimensional state space (or phase space) as a blue line. In the pendulum example, we can plot the two-dimensional state space (or phase space) as a plane, often called the phase plane. We can plot $\theta$ on the $x$-axis of the Cartesian plane and $\omega$ on the $y$-axis. In this representation, the current state of the system, $\theta(t)$ and $\omega(t)$, is a point $(\theta(t),\omega(t))$ on the phase plane, plotted as the red point on the left panel of the applet, below. The trajectory of the initial condition $(\theta(0),\omega(0))=(\theta_0,\omega_0)$ (the blue point labeled as $X_0$) is the green curve in the left panel.

Undamped pendulum. The dynamical system describing an undamped pendulum requires two state variables. The angle $\theta$ of the pendulum and the angular velocity $\omega$. These two variables completely describe the state of the pendulum. The state space (or phase space) $(\theta,\omega)$ is illustrated in the left panel. The space is periodic in $\theta$, and the range $-\pi \le \theta < \pi$ is shown. The initial angle and angular velocity, $\vc{X}_0 = (\theta_0,\omega_0)=(\theta(0),\omega(0))$, is set by dragging the blue point. The resulting evolution of the system is illustrated both by the green curve (the trajectory) and the moving red point, which indicates the state (i.e., angle and angular velocity) at time $t$: $(\theta(t),\omega(t))$. Gray arrows represent the speed and direction that the point $(\theta(t),\omega(t))$ moves through the state space. The right panel illustrates the evolution of just the angle $\theta(t)$ with respect to time $t$. The plot includes both the graph of $\theta$ versus $t$ in green and a moving red point, corresponding to the similar curve and point in the left panel. Above the graph are slider by which you can change the time $t$ and a graphical illustration of the pendulum with angle $\theta(t)$ and angular velocity $\omega(t)$. If the angular velocity $\omega$ is sufficiently large, the pendulum will swing around past an angle of $\pm\pi$. In this case, the variable $\theta(t)$ will wrap around from $\pi$ to $-\pi$ or vice versa. At those points, the green curves will contain extraneous lines crossing between $\theta=\pi$ and $\theta=-\pi$. Those lines should be ignored.

The state space isn't really a plane because the angle $\theta$ is $2\pi$-periodic. The left edge of the plane at $\theta=-\pi$ is really the same thing as the right edge of the plane at $\theta=\pi$, as both corresponding to the pendulum pointing straight up. You could imagine taking the phase plane plotted in the left panel and rolling it into a cylinder so that the lines $\theta=-\pi$ and $\theta=\pi$ match up. The cylinder would be a better representation of the phase space. The angular velocity $\omega$, however, is not periodic, as positive values indicate a counterclockwise rotation of the pendulum (shown as an inset in the right panel) and negative values indicate clockwise rotation.

The right panel of the above applet shows a plot of the pendulum angle $\theta$ versus time. Because the state space is two-dimensional, we can't easily plot the full system state $(\theta(t),\omega(t))$ versus time. Instead, we chose to just plot the angle. (We could have also included a separate plot of $\omega$ versus $t$.) Again, this plot should really be on a cylinder, as the top edge of the gray region is $\theta=\pi$ and the bottom edge is $\theta=-\pi$, which are really the same thing.