In our initial presentation of Green's theorem, we stated that the total circulation of a vector field $\dlvf$ around a closed curve $\dlc$ in the plane is equal to the double integral of the “microscopic circulation” over the region $\dlr$ inside $\dlc$, \begin{align*} \lint{\partial \dlr}{\dlvf} = \iint_\dlr \left( \pdiff{\dlvfc_2}{x} - \pdiff{\dlvfc_1}{y}\right)dA. \end{align*} (Here we write $\dlc=\partial \dlr$ to show that $\dlc$ was the boundary of $\dlr$.) We illustrated the idea behind Green's theorem with this sketch showing the “microscopic circulation” in $\dlr$ as little green oriented circles. We need $\dlc$ to be oriented in a counterclockwise fashion. Although we didn't stress it in the initial reading, Green's theorem, of course, requires that $\dlvf$ be defined everywhere inside $\dlr$.

As usual, we like to keep our initial presentations as simple as possible, so we don't include all possible complications. It turns out that Green's theorems applies to more general regions that just those bounded by just one simple closed curve. We can also use Green's theorem for regions $\dlr$ with holes in them, such as with the region between the red and the blue curves sketched below. In this case, the requirement is that $\dlvf$ is defined everywhere in $\dlr$, though it doesn't need to be defined inside the holes. 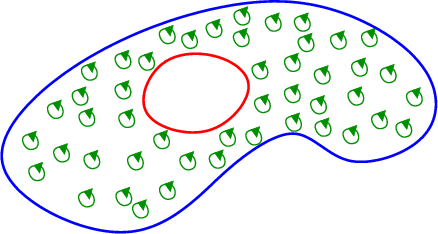 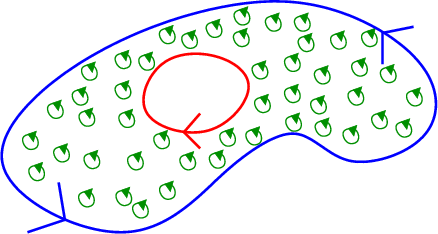 We can also describe the requirement for a positively oriented boundary using the right hand rule (which is how we'll discuss orientation of boundaries in the closely related Stokes' Theorem). The “microscopic circulation” denoted by the little green circles is oriented to coincide with the orientation of the curled fingers of your right hand if you point your right thumb out of the computer screen. If you place your right hand with thumb up in the region $\dlr$ and move it so that your fingers are next to any of the boundary components, the orientation of the boundary must coincide with the direction of your fingers. For the right hand rule to work, it is crucial that your hand be inside the region $\dlr$. In this case, your hand will be inside $\dlc_1$, showing that $\dlc_1$ must be oriented counterclockwise. Since your hand must be outside of $\dlc_2$ to be inside $\dlr$, the right hand rule shows $\dlc_2$ must be oriented clockwise.