The function machine is a handy metaphor that illustrates how functions work. A function $f$ takes an input, say represented by the variable $x$, and spits out the value $f(x)$.

The function machine metaphor can also aid one in understanding how a function can depend on parameters. Parmameters are additional quantities that influence the behavior of the function. However, unlike the input variables, parameters are typically viewed as being held constant, or possibly changing slowly.

The influence of parameters on a function is the like influence of dials on a machine. For a given setting of the dials, the machine processes the inputs in a certain way. If one leaves the dials fixed, then the function machine always spits out the same output value for a given fixed input value.

If one wishes to change how the machine is operating, one can adjust one of the dials, i.e., change one of the parameters. When the dials are changed, the machine still process the inputs and turns them into outputs. However, with new parameters, for the same fixed input value, the function machine may now spit out a different output value than it did before the parameters were changed. 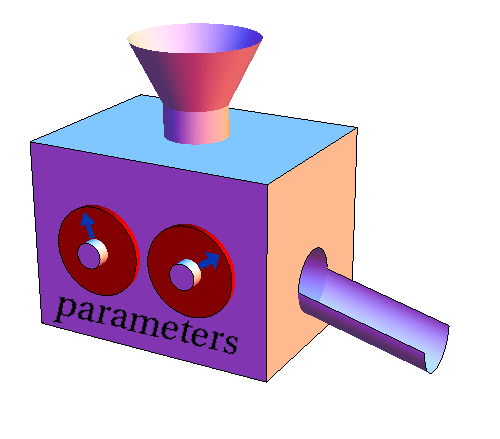 If we do such manipulations and look at how the output of a function depends on varying a parameter, then we are treating the function as though the parameter were a input variable. But that's OK, as the difference between variables and parameters is really just a matter of perspective.

The distinction between inputs and parameters is merely a matter of convenience. If we know that a setting is going to stay fixed for awhile, it is more convenient to represent it with a dial that doesn't change its value until we manually change it. Then, it is natural to explore the behavior of the function machine with many inputs before changing a parameter value.