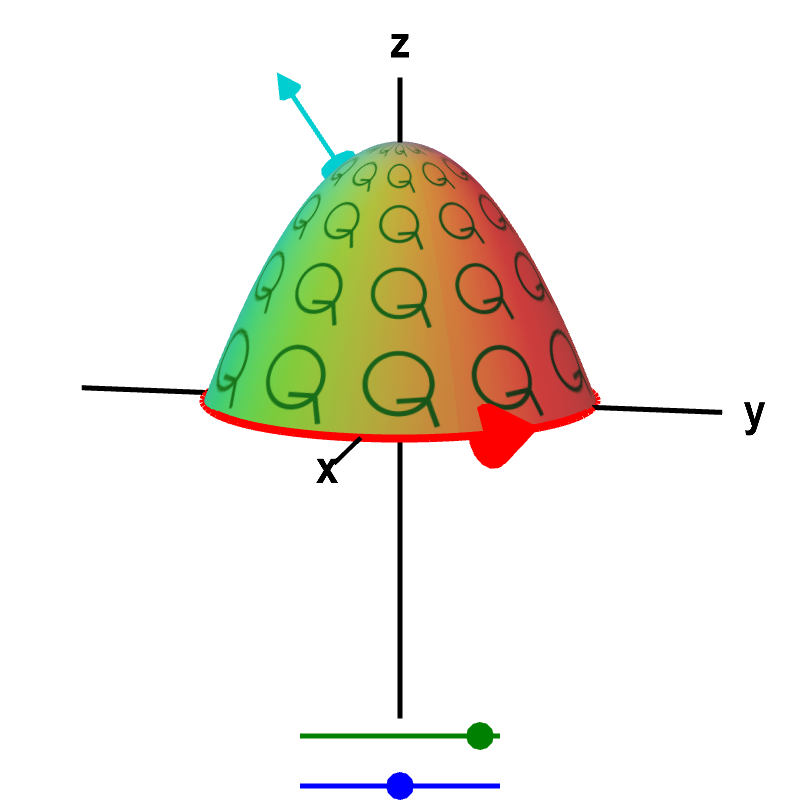 Remember, too, that the curve $\dlc$ can be floating or twisted in any direction. It doesn't have to look as simple as in the above examples. Thankfully, choosing the correct orientation doesn't have to be too difficult if you remember the right hand rule. If you look at your right hand from the side of your thumb, your fingers curl in the counterclockwise direction. Think of your thumb as the normal vector $\vc{n}$ of a surface. If your thumb points to the positive side of the surface, your fingers indicate the circulation corresponding to $\curl \dlvf \cdot \vc{n}$. In the above applet, the normal vector corresponding to the orientation of the green circles is shown as a cyan arrow. If you place the thumb of your right hand so that it points in the direction of the cyan normal vector, the fingers of your right hand curl in the direction corresponding to the orientation of the green circles.

With your thumb oriented corresponding to the cyan normal vector, move your hand along the surface toward its edges. When your fingers are next to the boundary of the surface, the red curve $\dlc$ must be oriented (by red arrow) to go around the same direction your fingers are pointing. If the relationship between the normal vector $\vc{n}$ and the orientation of $\dlc$ doesn't match the relationship between the thumb and fingers of your right hand, you'll be off by a minus sign when trying to apply Stokes' theorem.

Another way of thinking about the proper orientation is the following. Imagine that you are walking on the positive side of the surface (i.e, the side with the cyan normal vector in the above applet). If you walk near the edge of the surface in the direction corresponding to the orientation of $\dlc$, then surface must be to your left and the edge $\dlc$ must be to your right.

When the curve $\dlc$ and the surface $\dls$ are oriented as described above so that Stokes' theorem applies, we say that $\dlc$ is a positively oriented boundary of $\dls$.