The idea of the chain rule

The idea of the chain rule.

The chain rule of function machines 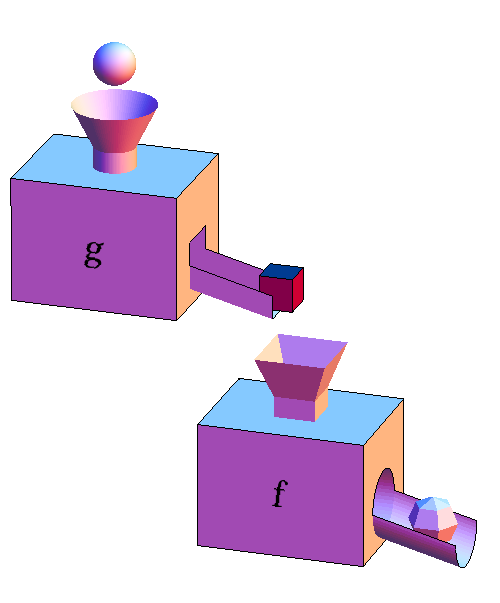 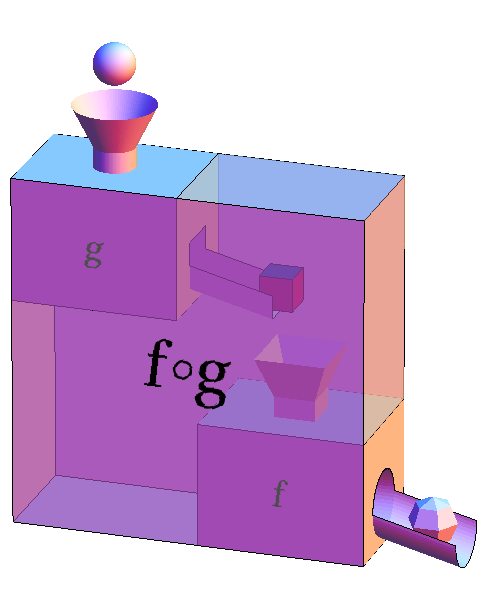 The chain rule for linear functions

The red arrows in the left panel illustrate how to graphically calculate $h(x)=f(g(x))$ where $x=x_0$. The conventions are nearly identical to those one uses for cobwebbing the solution to function iteration.

Since to calculate $h(x_0)$, the function $g$ is evaluated at $x_0$ and the function $f$ is evaluated at $g(x_0)$, these are the places where one needs to calculate the derivatives of $g$ and $f$, respectively. Even though the derivative for the case of linear functions doesn't depend on those points, one can still use the applet to remember that $h'(x_0)=f'(g(x_0))g'(x_0).$

The chain rule for linear functions. The linear functions $g(x)=ax+b$ (thick blue line on left) and $f(x)=cx+d$ (thin cyan line on left) are composed to to form the linear function $h(x)=f(g(x))=c(ax+b)+d =cax+cb+d$ (green line on right). For this linear case, the derivatives of $f$, $g$ and $h$ are simply the slopes of the lines: $f'(x)=c$, $g'(x)=a$, and $h'$ is just the product of $f'$ and $g'$: $h'(x)=ac$. In this case of linear functions, the chain rule is quite simple since the slopes are independent of the points where they are evaluated. Nonetheless, to prepare for the nonlinear case where slopes do depend on location, the relevant slopes to calculate $h'(x)$ at $x=x_0$ (represented by the red points on the x-axes) are tracked by the green points on the function graphs. The green point on the graph of $h$ in the right panel illustrates the point on the graph whose height is $h(x_0)$, as labeled on the vertical axis. The left panel illustrates the points on the graphs of $f$ and $g$ that are needed to calculate $h(x_0)=f(g(x_0))$. One first evaluates $g(x_0)$, shown by the green diamond on the graph of $g$. One then evaluates $f(x)$ at $x=g(x_0)$. The value of $g(x_0)$ is the height of the green diamond, as illustrated by the point on the vertical axis. To translate the value of $g(x_0)$ from the vertical to the horizontal axis, one can shift horizontally to the point $(g(x_0),g(x_0))$ on the $x=y$ line (the gray diagonal line). Then one simply moves vertically to the graph of $f$ to calculate $h(x_0)=f(g(x_0))$, which is labeled on the vertical axis. The relevant slopes of $g$ and $f$ are those calculated at the points needed to evaluate $f(g(x_0))$, i.e., the slope of $g$ at $x=x_0$ and the slope of $f$ at $x=g(x_0)$. Therefore, the derivative of $h$ at $x=x_0$ is the product of these slopes: $h'(x_0) = f'(g(x_0)) g'(x_0)$. You can change the parameter values by entering values in the boxes; you can also change $x_0$ by dragging one of the red points on the $x$-axes. You can zoom in, zoom out, or pan the axes by clicking the corresponding buttons.

The chain rule of nonlinear functions

If you understand the chain rule for linear functions, including where to evaluate the derivative, there isn't much more to understanding the chain rule for nonlinear functions. The only difference is that the tangent line to the graph of a nonlinear function does depend on the point at which you calculate the tangent line. Just as above, if you realize that to calculate $h(x_0)$ one must evaluated $g$ at $x_0$ and $f$ at $g(x_0)$, then it makes sense that $h'(x_0)=f'(g(x_0)) g'(x_0)$.

The following applet uses the same conventions as the above applet. It just is a lot messier than the above linear version because we need to plot the tangent lines which depend on the points where we evaluate the functions. The applet makes it clear that we'd get the wrong answer if we examined the slope of $f$ at $x_0$ rather than $g(x_0)$. The applet doesn't show the wrong tangent line with slope $f'(x_0)$ (that would make it too confusing). But you can see that the function $f$ does in general have a different slope above the point $x_0$ than it does at the green triangle.

The chain rule as multiplying slopes. The chain rule for the derivative of the composition $h(x)=f(g(x))$ of two functions $f$ and $g$ can be thought of as the product of the tangent line slopes. The trick is to evaluate the slopes at the correct points of the functions $f$ and $g$. The correct points, illustrated by the green symbols on the function graphs, are those where the functions are evaluated to compute $f(g(x))$. To calculate the composition $h(x)$ at $x=x_0$ (red dots on $x$-axis of the both panels), one must first evaluate $g$ at $x=x_0$, as illustrated by the green diamond on the graph of $g$ (thick blue curve in the left panel). Next, one evaluates $f$ at $g(x_0)$. To graphically translate the value of $g(x_0)$ from the vertical axis to the horizontal axis, one shifts horizontally from the green diamond to the line $x=y$ (gray line), arriving at the point $(g(x_0),g(x_0))$. By moving vertically to the graph of $f$ (thin cyan curve), one obtains $f(g(x_0))$, which is the vertical coordinate of the green triangle. In the graph of the composition $h(x)=f(g(x))$ (green curve in right panel), calculating $h(x_0)$ simply corresponds to moving vertically from the red point representing $x_0$ to the green circle on the graph of $h$, yielding the vertical coordinate $h(x_0)$. The slope of the tangent line at the green circle on the graph of $h$, is simply the product of the slope of $g$'s tangent line at the green diamond and the slope of $f$'s tangent line at the green triangle, just as in the case of linear functions. The slopes are shown near the green symbols, and the tangent lines are shown as thin lines of the same color as the function graphs. Therefore, the chain rule formula for the derivative of $h$ evaluated at $x=x_0$ is: $h'(x_0)=f'(g(x_0))g'(x_0)$. You can change the functions and $x_0$ by entering expressions in the boxes; you can also change $x_0$ by dragging one of the red points on the $x$-axes. You can zoom in, zoom out, or pan the axes by clicking the corresponding buttons.

This page focused exclusively on the idea of the chain rule. Of course, knowing the general idea and accurately using the chain rule are two different things. If you are new to the chain rule, check out some simple chain rule examples. If you want to see some more complicated examples, take a look at the chain rule page from the Calculus Refresher.