The simplest form of a linear discrete dynamical system is one where there is no constant term, i.e., a dynamical system of the form \begin{align} z_{n+1} = a z_n, \quad \text{for $n=0,1,2,\ldots$} \label{linearnoconstant}\tag{1} \end{align} where $a$ is a parameter. This form of dynamical system includes exponential growth and decay, which occurs when $a$ is positive. But, here we will also allow $a$ to be negative, so we'll get a larger range of behavior.

Our goal is to determine the equilibria of model \eqref{linearnoconstant} and their stability as a function of the parameter $a$. We can do this graphically, using the cobwebbing applet. You'll need to do some translations in the notation because the applet is set up for a model of the form $x_{n+1}=f(x_n)$. Just use $z$ rather than $x$ and notice that for model \eqref{linearnoconstant}, we are using the function $f(z)=az$.

To find the equilibria using the cobwebbing applet:

The next step is to determine what happens to the equilibria when one adds a constant term to the dynamical system, yielding a dynamical system of the form \begin{align} y_{n+1} = b y_n + c, \quad \text{for $n=0,1,2,\ldots$} \label{linearwithconstant}\tag{2} \end{align} where $b$ and $c$ are parameters, which can be positive or negative.

Repeat the same procedure for this model. In this case, find the equilibria algebraically, by making both $y_n$ and $y_{n+1}$ be the same quantity and solving for that quantity. You might find that, when the constant term $c$ is not zero, there is a particular value of $b$ where there are no equilibria.

For the cases where there are equilibria, we want to determine how their stability depends on the parameters $b$ and $c$. You can use the above steps to determine the stability, remembering that one has to use $x$ rather than $y$ in the applet.

Finding a linear approximation around equilibria

Since this behavior is too complicated for us to deal with right now, we are going to see if we can understand some aspects of a nonlinear system by pretending it is a linear system. We'll use this trick to understand the condition for the stability of equilibria.

Graphically, finding equilibria of nonlinear systems isn't any more difficult than for linear systems. We just graph $x_{n+1}=f(x_n)$ (in blue, below) on the same axes as the diagonal $x_{n+1}=x_n$ (in red, below). Equilibria are the points where the blue curve intersects the red line. 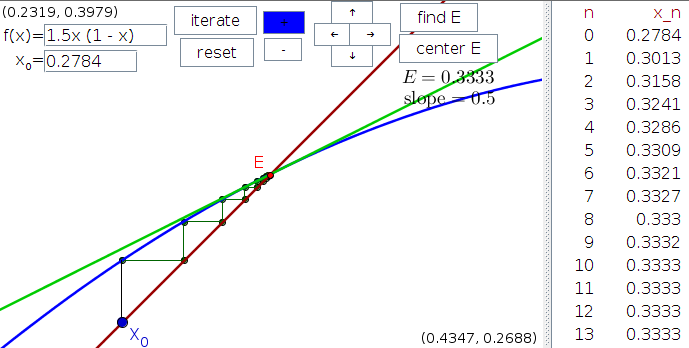 Cobwebbing and linear approximations around equilibria. Cobwebbing provides a way to visualize how a linear approximation to a function captures the behavior of its iteration near equilibria. Clicking the “iterate” button shows the behavior of the function iteration $x_n = f(x_{n-1})$ in a cobweb plot. The iterates $x_n$ are also displayed in the list at the right. To find an equilibrium (defined by $E=f(E)$), click the “find E” button, then click near a point where the graph of $f(x)$ (blue curve) intersects the diagonal $y=x$ (red line). If an equilibrium is found, the value of $E$ is displayed and a red point appears at the coordinates $(E,E)$. The linear approximation of $f$ around $E$ appears as a green line that is tangent to the graph of $f$ at the red point, and the value of its slope is displayed. If you click “center E,” the red point representing $E$ will be centered, and you can zoom in with the + button to see the behavior of $f$ right around $E$. What do you notice about the relationship of the linear approximation in green and the function in blue when you zoom in on the equilibrium? What does this say about the ability of the linear approximation to predict the behavior of $f$ around $E$? You can change the function $f(x)$ by typing a new function in the box. You can change the initial point $x_0$ by typing a new value in the box or dragging the blue point. You can zoom in and out with the + and - buttons as well as pan in different directions with the buttons labeled by arrows.