Examples of changing the order of integration in double integrals

Changing the order of integration is slightly tricky because its hard to write down a specific algorithm for the procedure. The easiest way to accomplish the task is through drawing a picture of the region $\dlr$. From the picture, you can determine the corners and edges of the region $\dlr$, which is what you need to write down the limits of integration.

Change the order of integration in the following integral \begin{align*} \int_0^1 \int_1^{e^y} f(x,y) dx\, dy. \end{align*} (Since the focus of this example is the limits of integration, we won't specify the function $f(x,y)$. The procedure doesn't depend on the identity of $f$.)

The maximum range of $y$ over the region is from 0 to 1, as indicated by the gray bar to the left of the figure. The horizontal hashing within the figure indicates the range of $x$ for each value of $y$, beginning at the left edge $x=1$ (blue line) and ending at the right curve edge $x=e^y$ (red curve).

We have also labeled all the corners of the region. The upper-right corner is the intersection of the line $y=1$ with the curve $x=e^y$. Therefore, the value of $x$ at this corner must be $e=e^1=e$, and the point is $(e,1)$.

To change order of integration, we need to write an integral with order $dy\,dx$. This means that $x$ is the variable of the outer integral. Its limits must be constant and correspond to the total range of $x$ over the region $\dlr$. The total range of $x$ is $1 \le x \le e$, as indicated by the gray bar below the region in the following figure.

Since $y$ will be the variable for the inner integration, we need to integrate with respect to $y$ first. The vertical hashing indicates how, for each value of $x$, we will integrate from the lower boundary (red curve) to the upper boundary (purple line). These two boundaries determine the range of $y$. Since we can rewrite the equation $x=e^y$ for the red curve as $y=\log x$, the range of $y$ is $\log x \le y \le 1$. (The function $\log x$ indicates the natural logarithm, which sometimes we write as $\ln x$.)

According to the limits of integration of the given integral, the region of integration is \begin{gather*} 0 \le x \le 1\\ x \le y \le 1, \end{gather*} which is shown in the following picture. 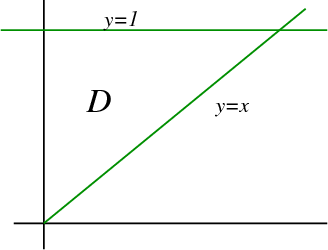 Solution: The region $\dlr$ described by this integral is \begin{gather*} \pi/2 \le x \le 5\pi/2\\ \sin x \le y \le 1. \end{gather*} as shown in the following image, where the total range on $x$ is shown by the gray bar below the region, and the variable boundaries for $y$ are shown by the blue and cyan curves.

One trick for changing variables with this region is correctly dealing with the lower boundary $y = \sin(x)$. When we solve this boundary equation for $x$ as a function of $y$, we may be tempted to write it as $x = \arcsin(y)$ and maybe even think that $x \le \arcsin(y)$ in the region.