One tricky part of calculating define triple integrals is determining the bounds of integration. To help you in this endeavor, we outline a couple methods for reducing the task of finding these bounds to the simpler task of finding bounds on a double integral combined with a single integral. One such method is one we call the “shadow method,” which we describe another page. Here we describe a method we call the “cross section method.”

To begin, imagine taking a big meat cleaver and chopping the three-dimensional region $\dlv$ into slices perpendicular to one of the coordinate axes (in a similar manner to the way in which we take cross sections of a surface). If you view the axis perpendicular to the slices as being vertical, then you could view the region $\dlv$ as being composed of a bunch of these cross sections stacked on top of each other. For example, for the below ellipsoidal region, we would view the $x$-axis as being vertical. 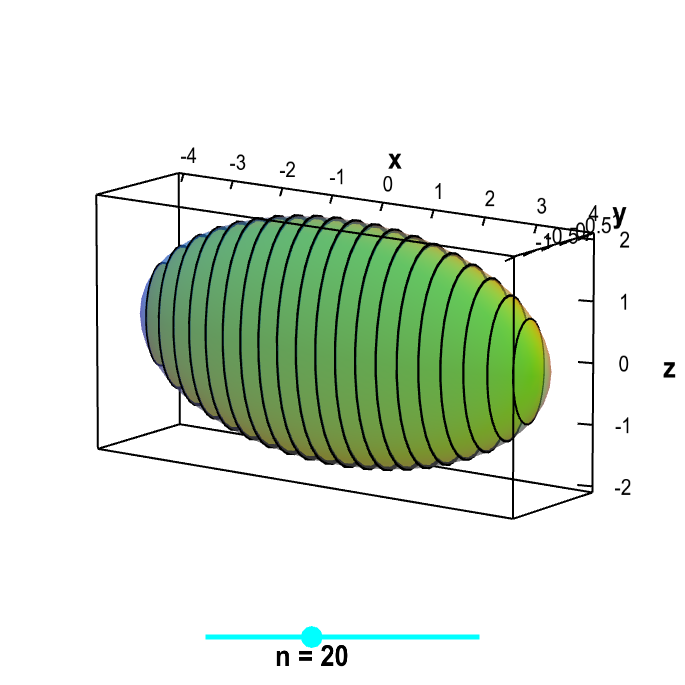 We illustrate the cross section method with an example.

Solution: The mass of the pyramid is the integral of its density: $$\text{mass of pyramid} = \iiint_{\dlv} f(x,y,z) dV,$$ where $\dlv$ is the pyramid. The first task is to determine the integration limits given by $\dlv$. 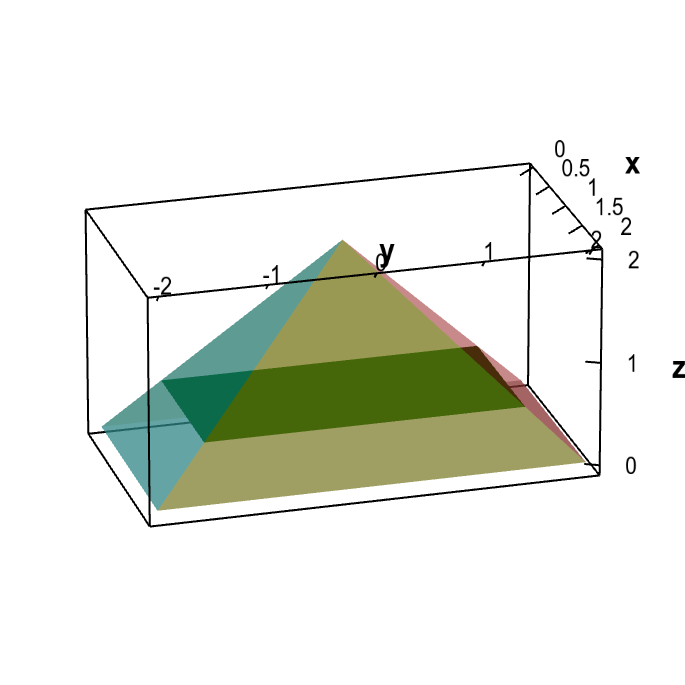 Demonstrating the cross section method for computing triple integral limits. The transparent region is a pyramid bounded by the planes $z=0$, $z=4-2x$, $z=2-y$, $z=2x$, and $z=2+y$. The cross sections perpendicular to the $z$-axis are rectangles, as illustrated by the single green cross section shown. By moving the rectangle up or down, you can change the value of $z$ at which the cross section is calculated. 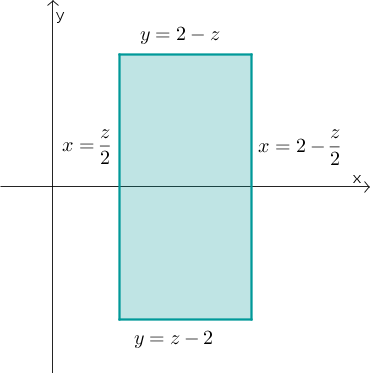 The bottom of the pyramid is $z=0$, as that plane is one of the given boundaries. The top of the pyramid occurs where all four planes meet, which is when $z=2$. Therefore, the top and bottom integration limits are $$\int_{\text{bottom}}^{\text{top}} \cdots dz = \int_0^2 \cdots dz.$$

It would be possible to calculate the triple integral using the shadow method. The shadow would be the rectangle $0 \le x \le 2$, $-2 \le y \le 2$. However, for this pyramid, the calculation would be more difficult as the function $\text{top}(x,y)$ for the shadow method would be four different triangular regions. You'd have to break up the integral into four parts. For this reason, the cross section method is easier for this example.