The double cone is a very important quadric surface, if for no other reason than the fact that it's used to define the so-called conics -- ellipses, hyperbolas, and parabolas -- all of which can be created as the intersection of a plane and a double cone. See any PreCalculus or Calculus textbook for pictures of this. 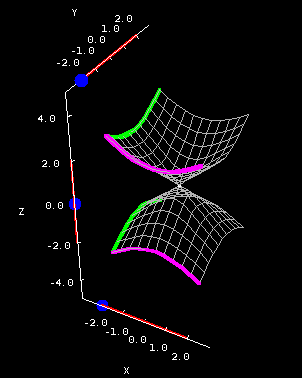 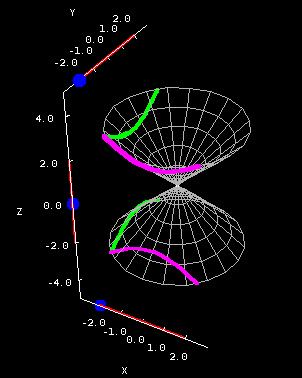 Look back at the equation for the double cone. Sometimes we manipulate it to get a single cone. If we solve for $z$, we end up with a plus/minus sign in front of a square root. The positive square root represents the top of the cone; the negative square root gives you an equation for the bottom. Be careful if somebody says “cone” without elaborating; they might mean “double cone” or “single cone,” depending on the context.

Roughly speaking, the constants $A$ and $B$ determine how “steep” the cone is in the $x$ and $y$ direction, respectively. You can get a feel from this in the second applet, below, which at the left shows the portion of a cone for which $x$ and $y$ are between -1 and 1. In the right panel, the domain is a disk, and it shows the portion of the cone for which $-4 \le z \le 4.$ 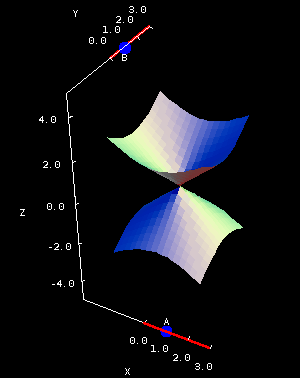 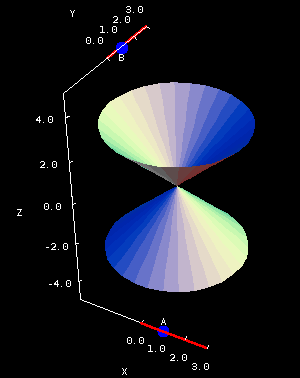 Double cone coefficients. The cone $z^2=Ax^2+By^2$ is plotted over the square domain $-2 \le x \le 2, -2 \le y \le 2$ in the first panel. In the second panel, the same cone is plotted over the elliptical domain for which $-3 \le z \le 3$, a domain whose shape depends on the coefficients $A$ and $B$. You can drag the blue points on the sliders to change $A$ and $B$, which are constrained to be positive.

After you've played around with the examples for awhile, see if you can answer the following questions: