This is probably the simplest of all the quadric surfaces, and it's often the first one shown in class. It has a distinctive “nose-cone” appearance.

The cross sections below are for the simplest possible elliptic paraboloid: $$z = x^2 + y^2.$$ 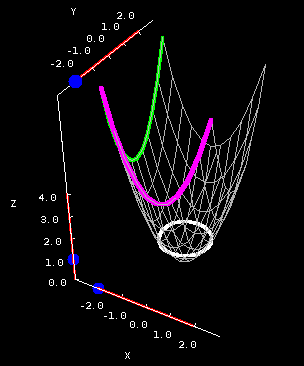 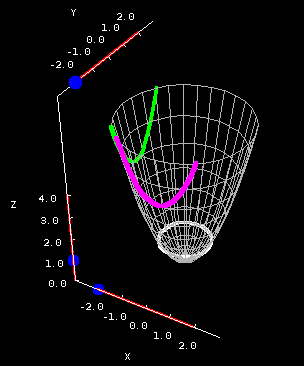 One important feature of the vertical cross sections is that the parabolas all open in the same direction. That isn't true for hyperbolic paraboloids!

Note that in this case, the horizontal cross sections are actually circles, but this isn't always the case. In fact, whenever $A$ and $B$ are not equal, the paraboloid will be wider in one direction than the other.

You can use the below applet to investigate how these coefficients affect the shape of the surface. On the left, it shows the paraboloid $z = A x^2 + B y^2$ over the square domain \begin{gather*} -2 \le x \le 2\\ -2 \le y \le 2. \end{gather*} On the right, the domain is a disk, and it shows the portion of the paraboloid for which $0 \le z \le 8$. When you change A and B, the domain will change accordingly. 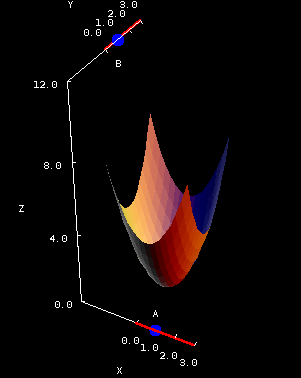 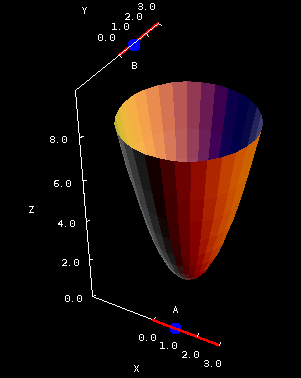 Here are a few things to think about:

The elliptic paraboloid was used to motivate the notion of level curves. Can you see that the level curves are equivalent to the above horizontal cross sections?