The procedure for calculating surface area is similar. A function $\dlsp: \R^2 \to \R^3$ (confused?) maps a region $\dlr$ in the plane onto a surface. For example, the function \begin{align*} \dlsp(\spfv,\spsv) = (\spfv\cos \spsv, \spfv\sin \spsv, \spsv). \end{align*} parametrizes a helicoid for $(\spfv,\spsv) \in \dlr = [0,1] \times [0, 2\pi]$. Similar to the arc length calculation, the first step in estimating surface area is to chop up the region $\dlr$ into a bunch of small rectangles, as illustrated below. 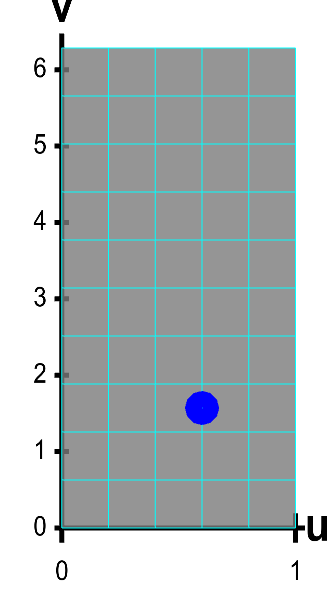 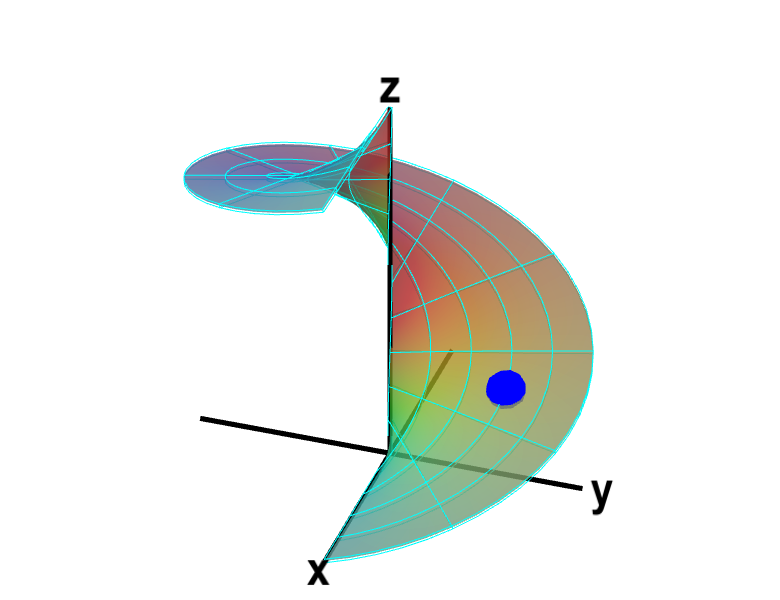 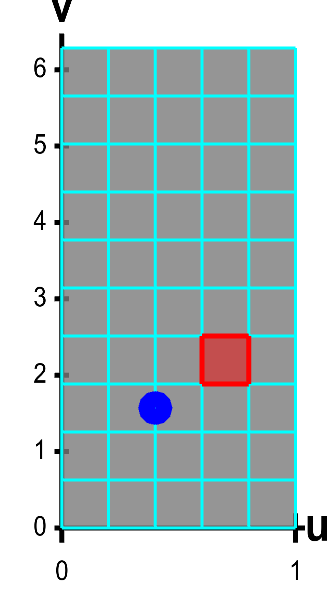 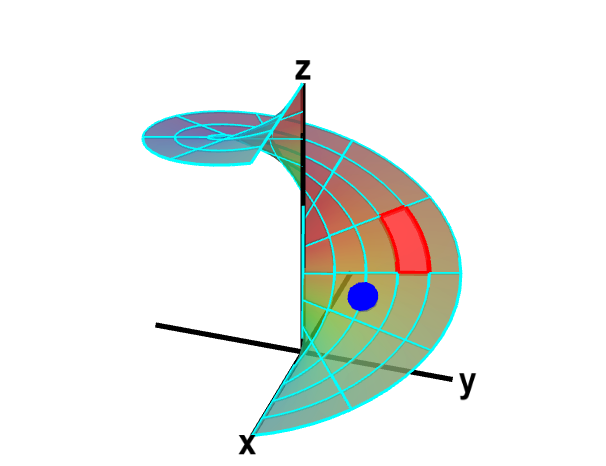 A parametrized helicoid with surface area elements. The function $\dlsp(\spfv,\spsv) = (\spfv\cos \spsv, \spfv\sin \spsv, \spsv)$ parametrizes a helicoid when $(\spfv,\spsv) \in \dlr$, where $\dlr$ is the rectangle $[0,1] \times [0, 2\pi]$. The region $\dlr$, shown as the rectangle on the left, is divided into small rectangles, which are mapped onto “curvy rectangles” on the surface at the right. To visualize the mapping, you can click on a rectangle in either panel to highlight it in red; the corresponding rectangle in the opposite panel is also hightlighted in red. The area of the red region on the helicoid depends on how $\dlsp$ stretches or shrinks the small red rectangle of $\dlr$ as it maps it on the surface. You can also drag the blue point in either $\dlr$ or the helicoid surface, and the blue point in the opposite panel moves so that the location of the right point is $\dlsp(\spfv,\spsv)$ when the location of the left point is $(\spfv,\spsv)$.

The next step to calculate the surface area is to estimate the area of each of the curvy rectangles. We use exactly the same procedure we did to calculate the “area expansion factor” for a change of variables in double integrals. (In fact, the change of variable function $\cvarf: \R^2 \to \R^2$ can be viewed as a special case of the function $\dlsp: \R^2 \to \R^3$; the surface that $\cvarf$ parametrizes just happens to lie in the plane.)

The total surface area is approximated by a Riemann sum of such terms. If we let the rectangles shrink so that $\Delta\spfv$ and $\Delta\spsv$ go to zero, we would see that the total surface area is the double integral \begin{align*} A = \iint_\dlr \left\| \pdiff{\dlsp}{\spfv}(\spfv,\spsv) \times \pdiff{\dlsp}{\spsv}(\spfv,\spsv) \right\| d\spfv\,d\spsv. \end{align*}

You can read an example here.